I think this was an interesting build. Not designed for street travel, but it could be used in the suburbs, maybe.

But, since both a 3 and 4 wheel versions were built, (Roadbot 3 and Roadbot 4) using the same hardware, it was a very poignant example of the difference where efficiency is the point.

you can see the maker article, here. And a test run here.

So of course if the point is speed and power, no you wouldn't go that way. Just drive your Farrari-wanna-bee, sitting next to your trophy-girl and be happy.

This build does help depict the logic for the BEX, Elio and my Atlantric, given the 3 wheeler costs slightly less to build than a four.

The other savings not compared here is the act of dropping excess seating which has little to do with 3 vs 4 wheels, aside from the fact that a solo or tandem can fold inside a shorter aerodynamic shape much more satisfactorily. (Then consider the structural weight savings, and reduction of batteries)

So yea, an Indy-Cycle version in heft and size from the Roadbot 3 at maybe 10HP+ and capable of freeway speeds would be nice to see.
(But shorten that roll bar a little eh?, and how about a suspension while we are at it?) 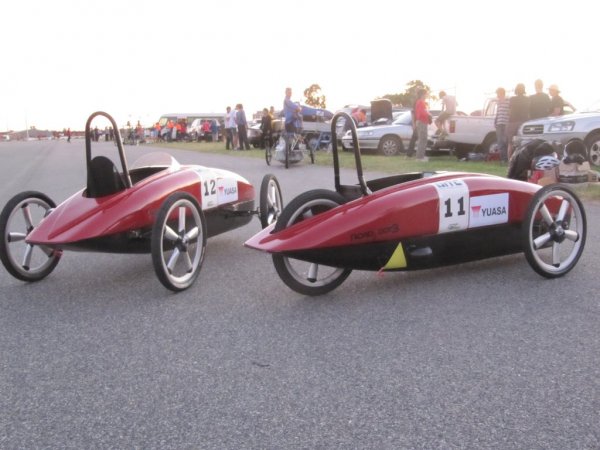 "This year we are using 20” wheels and are building 3 and 4 wheel cars. The 20” rear wheel, down from 26” in previous years allows a more reclined driving position which reduces the frontal area. The 20" wheels are also stronger for side loads than large bike wheels (note a bike does not apply side loads to a wheel when cornering) but have a slightly higher rolling resistance however at speeds over about 30km/h, reducing wind drag becomes more important than rolling resistance."
Last edited: Oct 4, 2021
You must log in or register to reply here.
Share:
Facebook Twitter Reddit Pinterest Tumblr WhatsApp Email Share Link
Top Bottom