The Lady And The Dale - A 3-wheeled Documentary

Describes mystery, fraud, and failure, so is completely different from Elio, except for the 3-wheeler which gets 70mpg.

The Lady and the Dale - the film traces the story of Elizabeth Carmichael, who rose to prominence when she released a fuel-efficient three-wheeled vehicle during the 1970s gas crisis. As she wins over major carmakers and investors, a web of mystery unfolds regarding the car’s technology and Carmichael’s surprising past. A portrait of an extraordinary entrepreneur’s rise and eventual fall, the series explores a one-of-a-kind story of fraud, family, and identity. Premieres on HBO Jan 31, 2021

I saw a video of that plus read about it. I believe the Dale vehicle is in a museum. The car as well as the creator was not they seemed to be.
Twentieth Century Motor Car Corporation. - Wikipedia. 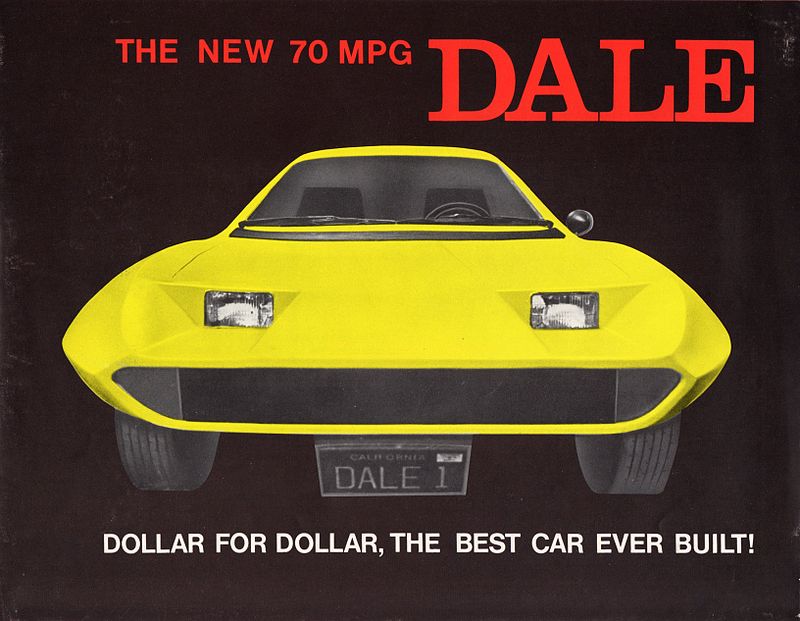 Hey, if Paul is following in those footsteps, maybe he's getting a sex change so we won't recognize him when he shows his face again?

History and the Dale, a car ahead of its time
I found this on YouTube.

DirecTV 281 MTHD has a new series, Seduced by Speed.
S1 E1 was about the Dale and "Elizabeth Carmichael".
No other showings are scheduled at this time.
Sign up for the series, all episodes and maybe you can catch a rebroadcast.

S1 E2 was about John DeLorean.
That one will be rebroadcast Sat, Feb 27 and Sun Feb 28.
S1 E3 will be about Jerry Wiegert and his Vector W8 supercar.

The one hour Dale documentary was very interesting and well done.
I lived through that period but had totally forgotten about it.